Skip to content
Home » Guitar Building Guide » Building a Body » How Deep Should a Neck Pocket Be?

How Deep Should a Neck Pocket Be?

Neck pocket depth is one of those topics that gets hashed and re-hashed endlessly. Once you understand the theory behind the basic requirements, you’ll never struggle with the subject again. Let’s break it all down in detail, but first, the “short answer”.

Body, Design Theory, FAQ
How deep should a neck pocket be?

A Fender-style neck pocket such as those found on a Telecaster or Stratocaster is typically 5/8″ deep. Read on to find out why, and what to do for different types of bridges and also non-bolt-on neck types.

There are a few factors that determine how deep to route a neck pocket. The two most important are neck attachment type and the style of bridge you’re using. Instead of just memorizing the Tele neck pocket dimensions, let’s look at these factors more closely and learn how to calculate the neck pocket depth for any guitar.

Bolt-on necks tend to be found on Fender-style Guitars. What does “Fender-style” mean? It’s essentially shorthand for a guitar that has a bolt-on neck and a bridge that holds the strings close to the body and therefore does not require a neck angle. A Fender Telecaster is an example of what we’re talking about here. Before we learn to calculate the neck pocket depth, first we need to talk a bit about the heel area on a bolt-on neck.

Anatomy of a neck

At last! Now we get to the math. Let’s start with this golden “rule”: the top of the fretboard needs to be 3/8″ (~9.5mm) above the top of the body. That works out to a comfortable amount of wiggle room for string height adjustment with a low-profile bridge. In the wishy-washy world of guitar building, sometimes there are no rules, and other times there are! Think of this as one instance where history has shown that this “rule” is pretty solid.

If you need a neck pocket template, I can help with that.

So that’s the “straight-forward” world of how to calculate neck pocket depth for a Fender-style guitar. Now, let’s shake things up a bit.

Does anything change with different bridge styles?

Yes. Yes it does. Bridges generally come in two styles:

So how does the type of bridge affect the neck pocket depth? We’ve already covered the low-profile bridge scenario, so let’s look at the “tall” bridge option, often referred to as a “Gibson-style” bridge.

We need to raise the string height in the bridge area about 3/8″ higher than where it is with a low profile bridge (3/8″ + 3/8″ = 6/8″ or 3/4″). We can’t just make the neck pocket shallower to raise the neck though. Our standard 5/8″ deep neck pocket minus the 3/8″ we need would leave us with a pocket depth of 1/4″ and that won’t work! So, instead, we angle the neck just enough to raise the strings to our desired height. One way to achieve this is an angled neck pocket

Angled neck pockets aren’t that complicated. The end of the pocket closest to the bridge is one depth, and the end closest to the headstock is a little deeper. How much deeper depends on the angle you need, and that’s a topic to cover on another day! Let’s just say the shallow end is still 5/8″ for all the reasons we’ve already discussed, and the deep end is a little deeper.

How deep do you route the neck pocket for a set-neck guitar?

I’ve got good news for you. Now that we’ve done all the heavy theory for bolt-on necks, discussing set-neck guitars just got a whole lot easier! You’ve learned many of the elements of neck/pocket design. Let’s learn a few more.

Where bolt-on necks tend to have a total heel thickness of 1.0″, many set-neck heels are thicker. That’s not always the case, but it often is. Set-necks still have the same 1/4″ fretboard though, so that means the neck shaft is thicker than 3/4″. How much thicker? There’s no set rule. Not even a rule of thumb! But it doesn’t matter. All you have to remember is one simple thing: all the theory about how high the fretboard is above the top of the body for a bolt-on neck is still true for a set-neck. Read that again. In other words, the “official” formula for neck pocket depth on a set-neck is: deep enough to get the top of the fretboard 3/8″ above the top of the body. Done. Well, sort of “done”…

Exceptions. There had to be exceptions!

There are a few instances where all this wonderful theory falls down. Bridges that are recessed (sunk) into the guitar body; carved top guitars where the fretboard sits ON the guitar’s top; odd bridge types, and so on. All of these can alter the neck/pocket geometry. Just be aware of these cases and use the design concepts you’ve learned to get the string height at the bridge where you know it needs to be.

We’ve covered a fair bit of theory here. Take some time to digest it all, go slow, and measure twice (three times even!). Now that you’ve got these design concepts in your bag of tricks, you’ll know how to tackle any build much better than if you had just memorized “neck pockets are 5/8″ deep”. Let me know how it goes. 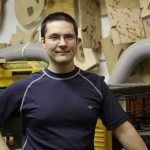 I built my first guitar in 2003. In 2008 I left my career as an IT geek and started Potvin Guitars. For the past 15 years, building guitars and helping other builders has been my full-time passion.
Share this article
Subscribe for Guitar-Building Templates, Jigs, and How-To Info Privacy Policy

Yes! Alert me when new Guitar Templates & Jigs are released